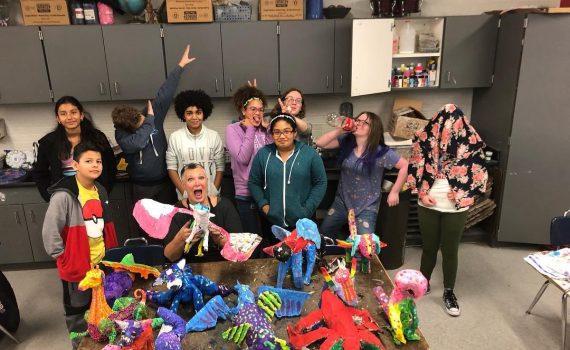 Some time ago Dan (heART of the City) reached out to ask if I wanted to write occasionally about my journey to becoming an art teacher. Absolutely! I am honored to share my story because it really has been quite liberating, and to perhaps evangelize a bit (or a lot) about the importance of an art education. Apologies up front, though, I’m wordy. Dan- edit away. J

About 2 years ago I decided to change careers and go back to school to become a teacher, specifically, an art teacher. I worked in museum education for years, and have taught a lot of different kinds of classes in my free time over the years, and there is just something that I love so much about sharing knowledge and helping others grow. Over the years, my mom would drop suggestions that I would be a great teacher. She studied to be an art teacher herself. I chose a different career path in college, and honestly, life happened. Three kids later and two separate careers in museums and marketing later, with my husband finishing his masters and my own unrest in my career growing, it felt like the time was right to make some change happen. 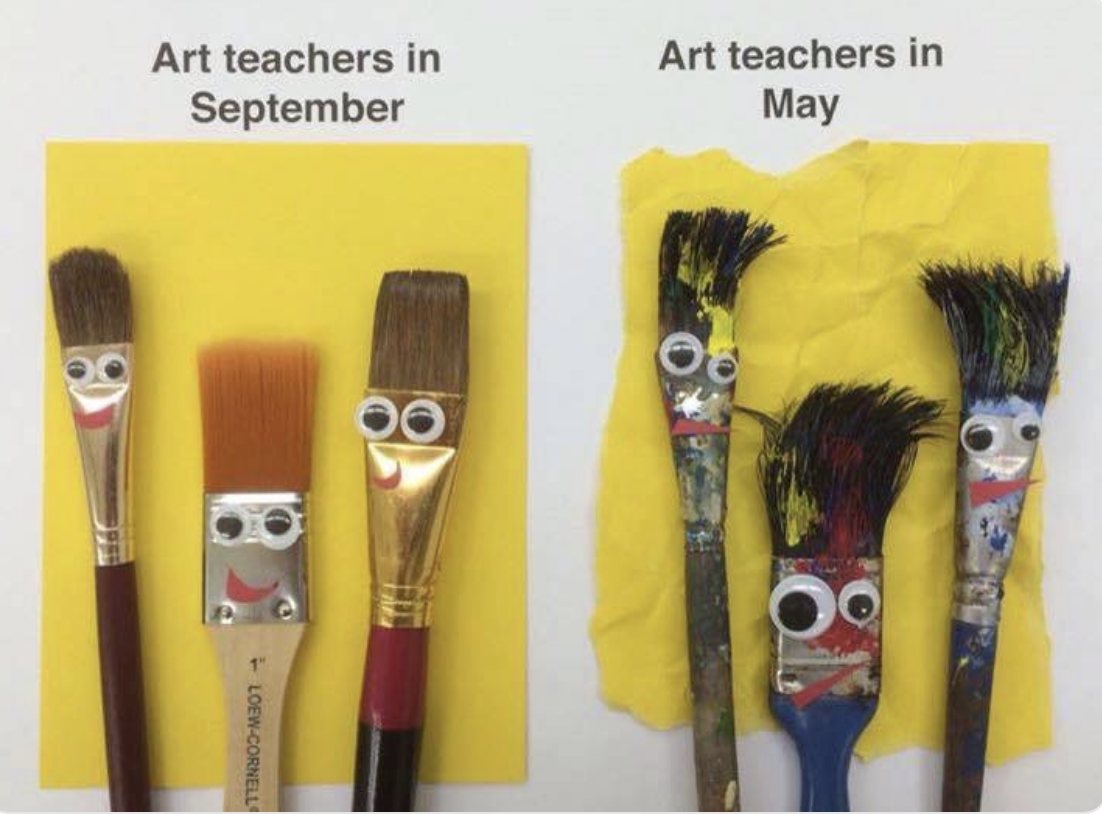 I knew pretty early on in this adventure that I want to end up teaching at a middle school, and was overjoyed to be placed at one for my student teaching experience. You might at this point be wondering if I’m of sound mind. I’ll admit, there are days that I also question that-I left a wonderful job doing marketing for a company that I still deeply care for, working alongside amazing people (including my dad and sister) to enter a completely new world of education and frankly take on a job that was a thousand times harder than anything I’d ever done.

Well, it just happens that I’d blocked out time to start writing my first post one evening earlier week, which happened to follow on the heels of one of my hardest teaching days to date. From the time Dan first brought up the idea, I figured that I’d start off my guest blogging by talking about WHY I decided to make the change to teaching. Honestly, though, I don’t think I fully understood the importance until this week. Or how tough it was going to be.

I was going to give you the sunshine and roses version…following my dreams, finally taking a chance and doing what I really want, making art all day long with kids, blah blah blah… Yes, guiding a student to an ‘a-ha’ moment is amazing. So is watching them perk up when you share some super cool artist with them and then they come up to make sure they got the name so they can look the artist up later. But while those types of ‘teacher gold’ make me feel warm and fuzzy inside, I am beginning to see that they aren’t the most important reasons why I need to be a teacher.

Do you remember your own middle school years? Who here had a crap-tastic middle school experience? I’m going out on a limb and saying quite a few. Remember the hormones and weird body changes, bad decisions and impulse control, cat-fights and frenemies and bullying? No longer being kids but also not being adults-and the adults in our lives forgetting that you’re caught in-between worlds and heaping unrealistic expectations on you? Yeah, those years.

But middle school IS a phase, and most of us come through it stronger for the adversity, wiser for the mistakes, and with a clearer picture of who we are…. Except those of us who don’t. I’ve always had a weak spot for the hurting and confused, maybe because I identified with those emotions so much over the years. Early on in my transition to teaching program, I knew that I one of my main motivators was walking alongside students and being a positive influence in their lives- to be one more voice cheering for them. I just didn’t know how tough that was going to be.

This has been a tough week for several of my classes behavior-wise. What I have been learning is that the very students that are driving you bonkers with their misbehavior are the ones who are likely hurting the most. I learned that the kid who has been disrespectful and ignoring your authority for weeks on end will stand in the hall with tears in her eyes and talk about how overwhelming her life is and how she just doesn’t want to think about what is going on at home or how she feels like a failure at school so instead she tries to make people laugh and like her in class to avoid the pain. I learned that the kid who acts like he doesn’t want to be bothered to learn how to draw realistic objects and scribbles instead of working on his still life actually really is dying to know-but it feels too hard for him and he’s worried that his friends will laugh so he tells you instead that this is dumb. I learned that, in theory, being there for the kids as they go through these tough years sounds noble and heroic, but in reality, it is messy and frustrating and sometimes it will feel completely overwhelming.

So, why teach? And why teach art? Those are two different questions, really, but the short answer is- I know art. I am really passionate about the benefits of an arts education. Art is a wonderful medium for self- expression and exploring the world around us. These are luxuries that frankly some other content areas aren’t often afforded in this day of standardized testing and rigid curriculum requirements. And the kids need them so much! Art can be used to build critical thinking skills, collaboration, etc….. I could go on. The bigger question, however, is why teach? In my short experience as a teacher, teaching as a profession as every bit as hard as popular myth would have it be. But these kids NEED us. The more they act out, the more they give you attitude, the more they don’t turn in their work, the more they are really telling us, “Don’t give up on me. I need help. I am scared and confused and I just need someone to care.”

P.S. I’m not sure I’m allowed to say what school I’m at but I couldn’t have asked for a better placement, and my supervising teacher and ‘the other’ art teacher are wonderful mentors and have taught me so much-so here’s your shout out guys-you know who you are!